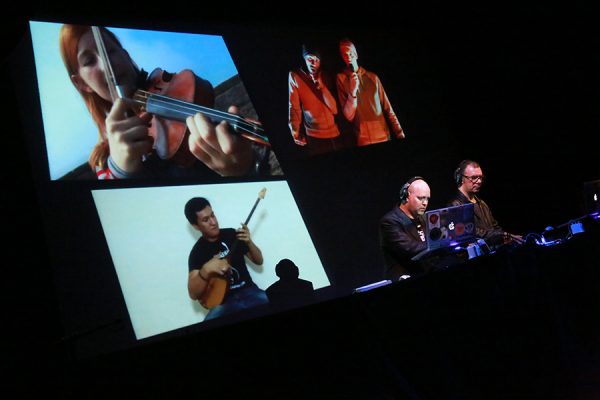 As artists, Addictive TV have been leading lights in the AV scene for over 20 years. They’ve performed now in over 50 countries and were the first artists a Hollywood studio sanctioned to remix a movie as an alternative trailer back in 2005, plus back in the day were the first artists to be voted #1 VJ in the World in DJ Mag alongside the Top 100 DJ Poll, with the magazine saying “they’ve become famed for their eye-popping live shows, shredding and cutting film with beats into a heady, mind-meltingly funky mixture”.

With Orchestra of Samples, picture over 200 musicians from 30 countries and imagine that they’ve never met but are sampled, combined and reimagined to create new music of extraordinary fusions. Described by The Times as “ingenious and compelling”, Addictive TV filmed hundreds of improvised recording sessions with musicians around the world while touring, from Egypt to Colombia and Senegal to India, then sampled and ingeniously spliced them together for their latest project, resulting in a digital supergroup of international artists who never met, but play together on-screen.  Join them on this unique musical journey without borders!