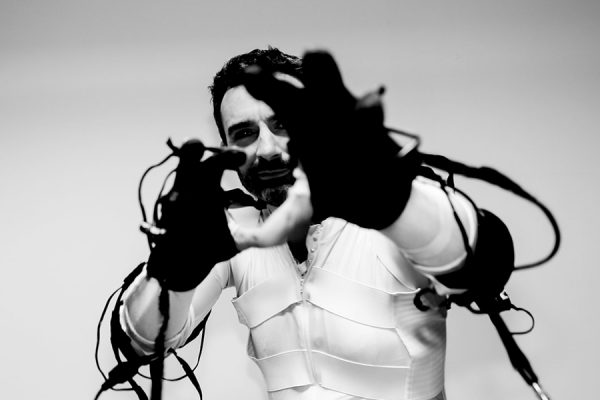 Eboman comes to Splice! A luminary and pioneer in the world of AV performance since the mid-90’s, Dutch artist Jeroen Hofs aka Eboman has graced the stages of festivals worldwide with his audiovisual performances of funky and wild video sampling and real-time video manipulation. In 1996 Hofs won the Silver Harp – the prestigious Dutch music award for new talent – and a year later he won the Dutch Buma Cultuur Pop Award. His AV sample-heavy release Donuts With Buddah became a huge hit in Holland, cementing his reputation as a real innovator in electronic music.

Since the beginning of his career as both an artist and entrepreneur, Hofs and his team at EboStudio have focused on the development of video sampling technology, including iTracks (an iOS app platform for video sampling) and even a video sampler for children. Everything from his SenSorSuit (a wearable AV sampling suit) to Augmented Stage (an interactive audiovisual show control system) have resulted in his recently released EboSuite, a plugin for music performance software Ableton Live.

Giving a presentation talk/q&a/workshop, Hofs will show EboSuite his video sampling, edit, mix and visual effects software aimed specifically at musicians and audiovisual performers using Ableton. Ebsosuite consists of a growing set of plug-ins that provide an unrivalled way of integrating video into live shows and music productions. It enables musicians and AV artists to produce/perform their own video clips and visual music without having to learn about complex video editing or VJ software, in fact everything needed to create and perform AV compositions can be done straight from Ableton Live.