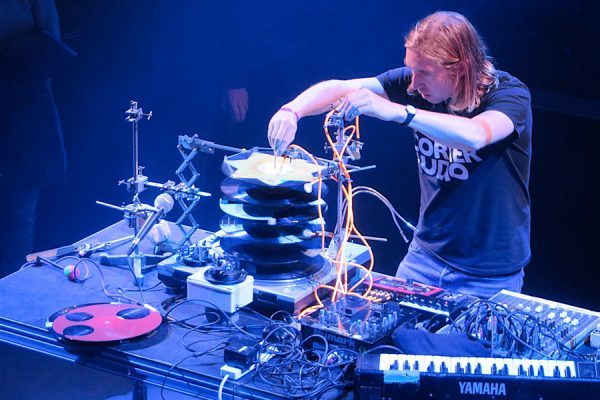 Graham Dunning is self-taught as a musician and artist having studied neither discipline academically. His live work explores sound as texture, timbre and something very tactile; drawing on ‘bedroom production’ methods, tinkering and recycling found objects. He also creates visual work, videos and installations drawing on these same themes. Much of his work evolves through experimentation with different processes; considering the methods by which sounds become music; process as a continuum encompassing both improvisational and procedural methods and testing equivalent processes across different media.

His ‘Mechanical Techno’ project is live electronic dance music created right before your eyes. As the mechanism holding everything spins, rattles and knocks while you watch, looking a little like a musical engineer building a musical robot, the project quite literally revolves around intense physical looping, layered records, triggered percussion, locked grooves and much much more, all held together on a single axle powered by a turntable!

“The whole set up is enormously precarious and part of the drama comes from the fact that it might all teeter out of sync or collapse at any moment. If the trend in recent dance music has been to artfully engineer a certain wonkiness into an otherwise strict digital framework, Dunning has found the appeal of the precise reverse: struggling to maintain grid-like rigidity in a system inherently antagonistic to it.” – Robert Barry, Wire Magazine, August 2015